Matt Drury may have a history of drug use, self-mutilation, and suicidal tendencies. He may struggle with being ripped from his poorer, friendlier neighborhood into snotty, wealthy High River ever since his mother’s low-budget cable talk show became syndicated nationally. He may be stuck trying to explain what’s wrong with him to an angry hairdresser turned psychologist.

But that nonsense doesn’t affect his life as much as getting a perfect score on the SAT. Suddenly, Matt attracts the attention of Emil Updike, that nefarious leader of the vast cheating network at High River. Before long, Matt is knee deep into the cheating network. Friends and enemies alike seek to pay him for services . . . anything from taking the SAT for them with a fake ID to providing social studies homework and test answers for the entire ninth grade.

So now, Matt Drury, who has never completed a homework assignment or studied for a test in his entire life, becomes the answer man, serving hundreds of dumb, lazy students for wads of cash. Sure, he tries to step away from it all. He dumps his drama queen girlfriend Barbara, joins the wrestling team, and takes a job with his old friend Janine at Burger Bastion. But the more Matt learns about the cheating network and how vile Emil Updike is, the more he wants to get inside the network to rip it and Emil apart. Once inside, he discovers stories of corruption, intimidation, beatings, and, in the case of Rob Luby, murder.

Fortunately, Matt isn’t alone. The only useful guest his mother ever had on her show, investigative reporter Mike Dorman, guides him on how to expose the cheating operation and to reveal the terrible truths about the Harvard-bound Emil Updike. Then there’s Vlad, a geek he had transformed into the cool kid everyone thinks is a vampire; Vlad spends his days cracking into the computer network, especially after being beaten by Emil’s goons for breaking the curve on a math test. Ultimately, Matt has to dig deeper, enlisting Eva, a confidante of Emil. Despite being a blonde bombshell prone to malapropisms (she talks of her “amble” breasts and her stunning “physic”), Eva gives Matt the information necessary so that he can play members of the cheating network off of each other and provide him a way to meet the Sphinx, the strange intellectual fount of the entire network – a adolescent so smart and sheltered that she spends ten minutes analyzing the relative value and purpose of a bacon, egg and cheese sandwich.

When he meets the Sphinx, everything turns upside down: Emil finally catches on to Matt and tries to kill him one brutal night; Matt discovers the biggest cheating scandal of them all; and most importantly, he figures out how Rob Luby was murdered and how he can bring his killer to some form of justice.

Indeed, Matt’s perfect score on the SAT is just the beginning for The Great SAT Swindle. Its conclusion is anything but perfect, but the answers Matt discovers are not ones that can be found on a standardized test.

Praise For The Great SAT Swindle

“In The Great SAT Swindle, Michael Hartnett takes readers on a wild ride through the privileged corridors of High River High, where cheaters are more popular than a vampire in Forks, Washington. That is until anti-hero Matt Drury arrives with a penchant1 for trouble and for words like penchant. Through Drury, Hartnett dumps the Mother Lode of SAT vocabulary words on his readers. The big words come with footnotes that provide definitions and jokes. The story offers up a smorgasbord2 of words bound to appear on the SAT. It’s both a fun read and a study guide. Plus there’s an ersatz3 vampire.”

“Michael Hartnett accomplishes what endless vocabulary lists haven't by presenting 1500 challenging words in a classic mystery format complete with detective, sidekick, victim and an assortment of idiosyncratic characters who will certainly resonate with high school readers.  The narrator's observations—hilarious poignant and literary— are a blend of high and low comedy and thoroughly engage the reader who anxiously awaits the next outrageous pun, metaphor, malapropism or allusion.

Find the book on Amazon 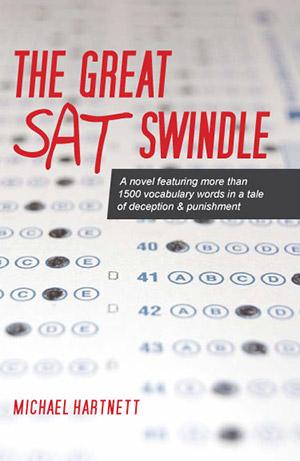